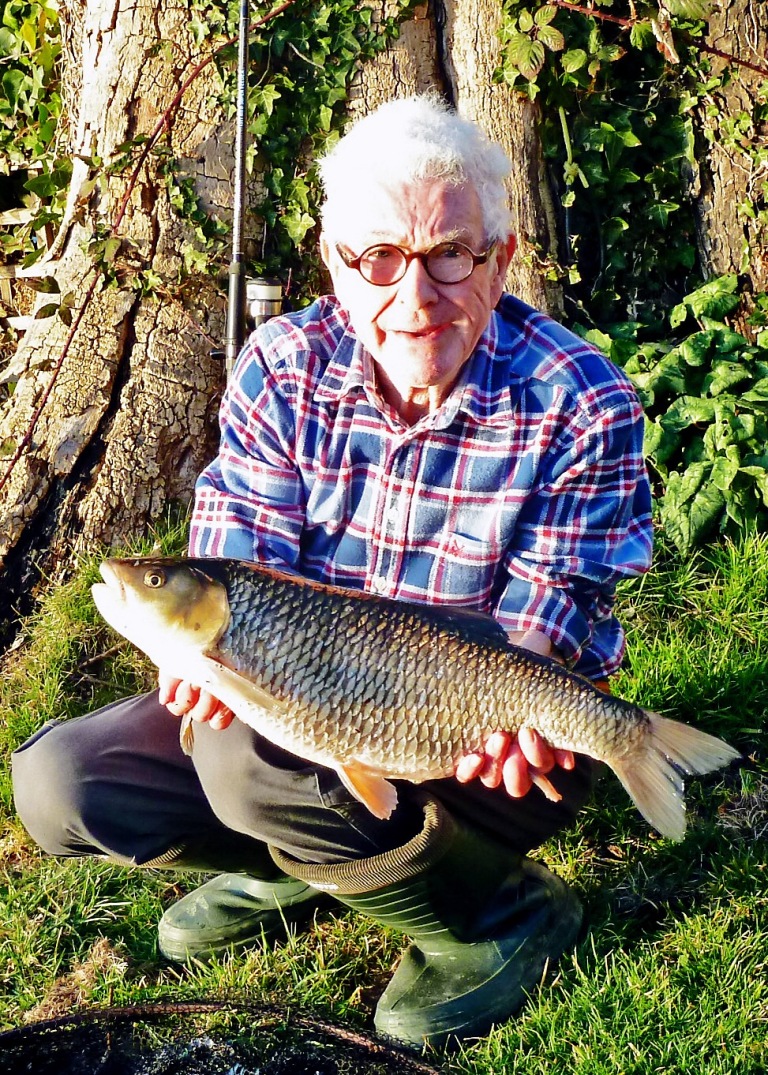 Frank Guttfield with his personal best Thames chub of 8.02 courtesy of Mike Tucker’s back garden

Just before the start of this year’s river season fishing lost one of it’s great ‘classic’ anglers. Frank Guttfield, author, broadcaster, and an old school specimen hunter, who fought and subdued many a big fish in his time, had finally lost his battle with cancer.

His first book, In Search of Big Fish – a year of his diary targeting big fish – was published in 1964 and became a sell-out cult-classic. He went on to write for all the major UK angling publications, including the Angler’s Mail and Angling Times as well as the Daily Mail and Fisch und Fang in Germany. He appeared on primetime TV, featuring as a fish expert on Johnny Morris’s ‘Animal Magic’ on BBC One, also co-starring in several episodes of Jack Hargreaves’ iconic ‘Out of Town’ on ITV. His second book, The Big Fish Scene, was published in 1978 and showed how the angling world had evolved since his first book – featuring chapters from a new breed of ‘Specimen Hunters’ including John Wilson, John Bailey and Kevin Clifford.

Frank didn’t follow trends in fishing, particularly when the bolt-rig revolution spread from Carp fishing into the rest of the specimen world. He described using bolt-rigs as “trapping rather than fishing”, as to him, fishing involved a strike. This sort of static, hands-off approach, however successful, was at odds with everything he had learned about fish and fishing over his 65 year angling career – the importance of lightweight, finely-balanced tackle and that the biggest fish were the trickiest to catch of all. Most of Frank’s big specimen chub, barbel and roach were caught light-ledgering, a tactic that he perfected over the years. He could hold bottom in raging flows with a minimum of lead, by fine-tuning the bow in his line and position of his rod and I am certain Frank regularly caught fish that an angler using heavier leads wouldn’t have even known were there.

In recent years he used these tactics to devastating effect on the Thames, landing 9 Chub over the 7lb mark. His best of 8lb 2oz is one of the largest ever recorded on the river. This personal best was landed only 3 months before his death and proves it is always worth ‘one last cast’, even if the odds are gravely stacked against you. 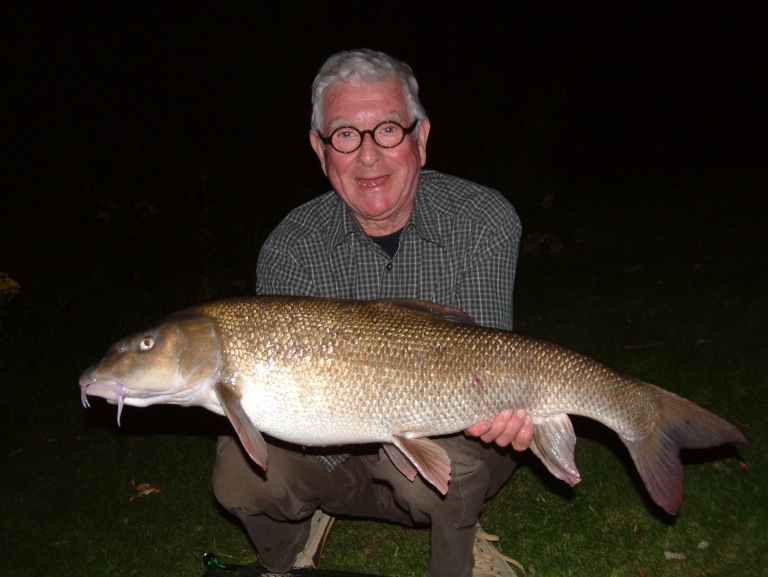 His other angling achievements include a 9lb plus Tench – which I think was at the time the second largest ever recorded – and also Rudd up to 3lb 5 oz, but river fishing was his true love, especially the Thames and its tributaries. In total he caught more than 200 Roach of over 2lbs, with a personal best of 2lb 14oz 8drms from the River Windrush in Oxfordshire. He caught many other personal bests on these rivers too – Barbel up to 13lb 10oz on the Thames and Perch of 4lb 4oz and Dace of 1lb from it’s tributaries.

Since his cancer diagnosis in March of 2013, Frank didn’t do much fishing. He blamed a lack of energy most of the time and suffered from anxiety. An old friend did get him out to fish from a mate’s garden that backs onto the Thames on the last day of the season in 2014 and he only went and caught yet another 7lb chub. That was pretty much it for fishing until this year when his old mate Chris Tarrant, almost literally, dragged him out to fish from the same garden. This time he bagged his fish of a lifetime, a chub of 8lbs 2ozs, despite the jibes from Chris shouting “Come on, stop playing about with it, Guttfield!”

The one fish that Frank really didn’t like was bream and on the last day of the 2015 season he went with the same friend back to the same garden swim. He had a bite and struck, but when it had surfaced his hopes were dashed as a beautiful pale golden bream of around 8lbs+ came into the net. It wasn’t weighed because he wasn’t interested, it was a bream after all, and he wouldn’t even lift it for the photograph. The irony is that the very last fish he ever caught in his life was one of his most disliked species, a bream. 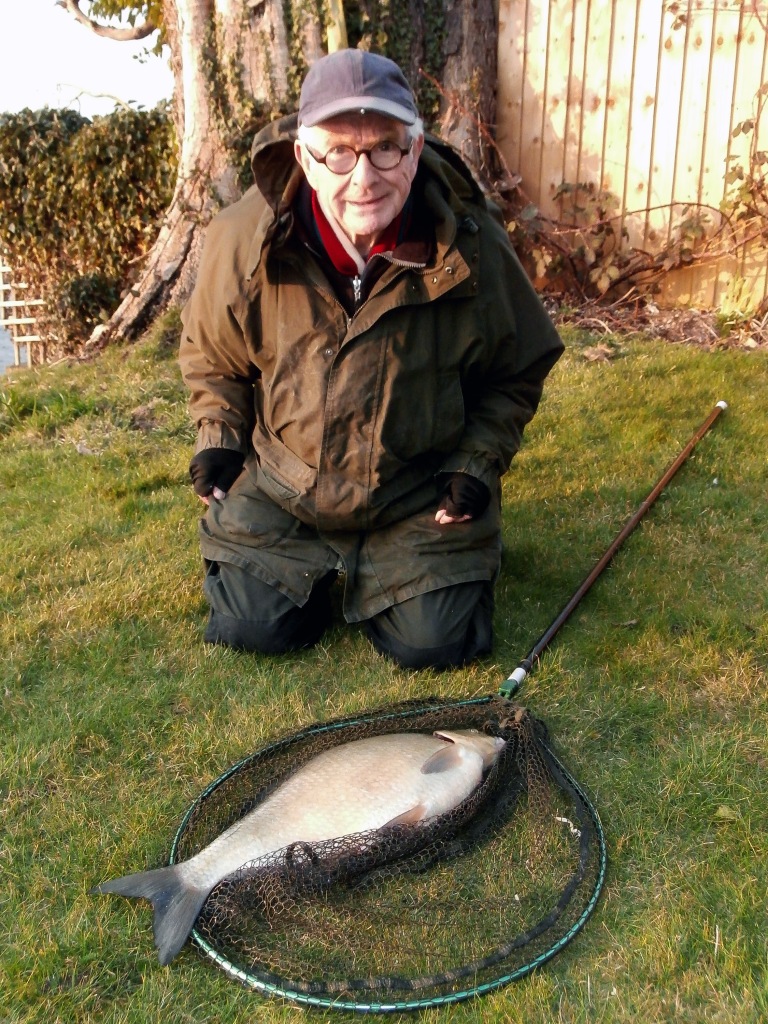 As regular readers of this column will know at the Angling Trust we have set up a special tributes page on our website so that people like Frank Guttfield, who have made a significant contribution to the world of angling, can be acknowledged and remembered. It is called “A Life Well Fished” and on Frank’s page we have some lovely tributes from his son Fred and his friends and fishing partners Chris Tarrant and Jeff Woodhouse. Their words also form some of the basis for this piece.

You can read the tributes in full here http://www.anglingtrust.net/page.asp?section=1074&sectionTitle=Angling+Tributes

If anyone else who knew and fished with Frank wants to add some thoughts and reminiscences of their own please get in touch with me through the Angling Trust office in Leominster.

I can’t remember exactly when it was that I first fished with Frank – probably around 17 years ago when I joined the Red Spinners. We both enjoyed fishing the smaller Thames tributaries around Oxford. Sadly they were already in decline but both the Windrush and the Evenlode still held a few fine specimen chub, roach and perch if you knew where to look. That was one of Frank’s great strengths, he really was quite expert at not just catching fish but at tracking them down. For several years he ran a small syndicate on the Windrush of which I was a sometime member and he guided me on to a number of very welcome two pound roach which are still my favourite species today. But I guess it was chub fishing that was Frank’s speciality and he was certainly one of the finest exponents of light ledgering that I’ve ever seen.

Frank was a man interested in many things including politics and persuaded me that I should have him up to lunch in the House of Commons during my time there. I was happy to oblige and I shall never forget him pulling out a musty old file and regaling me with some conspiracy theory he had about corporate wrong doing that I should be investigating. I asked him when all these shenanigans were alleged to have taken place and he said: “Oh .. sometime in the 1960s but I was just waiting until I met the right person to take this on!” Although I politely declined Frank’s kind offer to immerse myself in a 30 year old case many miles from my own constituency we remained on good terms and he particularly enjoyed fishing with some of my angling MP friends including Charles Walker who now chairs the All Party Parliamentary Group on Angling. Frank even persuaded me to offer a work experience placement to his super bright young son Max who proved to be a great asset to my parliamentary office.

Frank could be awkward and irascible, charming and warm, grumpy and witty but there was scarcely a dull moment when he was around. There was always something going on in that sharp brain of his and it is a great shame that he has fished, written, spoken, loved and laughed for the last time.