Cormorant Damage – We need your pictures

We are extremely grateful for the huge support the Angling Trust has received for our Action on Cormorants campaign. Currently the Defra review into fish eating birds is set to report by the end of the year and we are expecting a ministerial statement in response shortly thereafter. Therefore now is the right time to step up pressure. We know that MPs have been sent plenty of our campaign postcards by anglers as we’ve had to respond to requests for more supplies of them from tackle shops and fisheries. Will Smith, our excellent membership manager, has sent out  in excess of 100,000 from the Leominster Office. 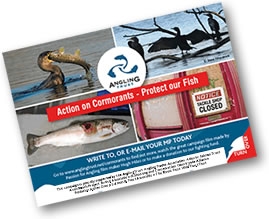 When we launched Action for Cormorants back in July we not only urged people to write to their MPs  but to send in images or stories of cormorant damage affecting clubs, fisheries or livelihoods. We’ve had some horrendous stories of the damage that the cormorant invasion has done rivers and stillwater fisheries but we could do with some more pictures, particularly those that illustrate how cormorants don’t just take fish for food but will attack and injure fish that they could never swallow leaving them vulnerable to disease and a slow death.
As part of the campaign we are planning to publish a dossier highlighting the damage that cormorants have done to our native fish stocks and it would be really useful if anglers could submit a few more horror pictures to help us get across the case for allowing clubs and fishery owners the ability to protect their fish from this wholly unsustainable level of predation.
We’ve got a fair few to post up but some of the photos submitted so far can be found HERE
http://www.anglingtrust.net/page.asp?section=839&sectionTitle=Pictures+of+the+damage+done+by+cormorants
There’s a few more gruesome pictures below and I make no apology for displaying graphic images of the aftermath of a cormorant attack. It’s high time people realised the carnage that has been going on as a result of a 14 fold increase in cormorant numbers since the 1980’s.
Photographs and information can be sent to cormorants@anglingtrust.net or to our Leominster office at 6 Rainbow House, Leominster, Herefordshire, HR6 8DQ

Just to lighten the mood here’s some rather nice dace that I found on the upper Kennet the other day in a spot where the cormies simply couldn’t get to..