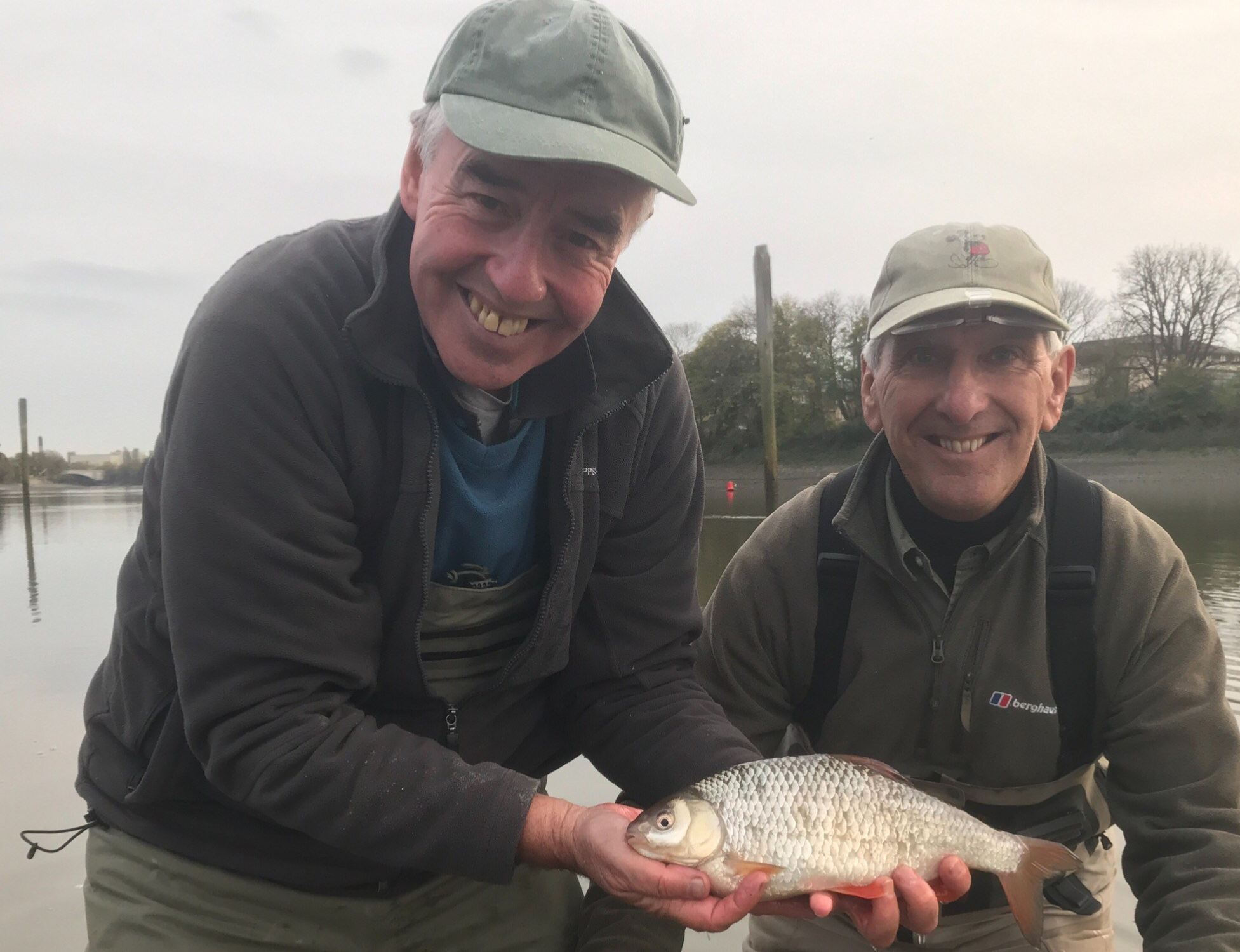 It must be nearly ten years ago that various ‘superstar anglers’ began telling us that river fishing in Britain was finished and we should all go and fish in Thailand or in a fenced off safari park where otters, cormorants and Eastern Europeans feared to tread.

Well it’s not quite worked out as predicted has it? The Severn has been fishing it’s head off for roach and dace this year, to the extent that there’s talk of holding a future Riverfest final at Shrewsbury. The Wye continues to be prolific and the barbel fishing on the Trent has been nothing short of phenomenal. Down south, where I live, I think it’s fair to say that the chub fishing has never been so good on the Hampshire Avon as it is right now and it’s great to hear of the return of good roach catches from parts of both the Avon and the Stour. Over in Kent the Meadway has once again been providing some great sport and then there is Old Father Thames.

I was brought up fishing this wonderful river in the 60’s and 70’s when there were signs on the riverbank warning bathers that they enter at their own risk due to poor water quality. Now we have regular runs of seatrout navigating the locks and weirs and entering tributaries such as the Colne, Loddon and Wandle. In the 1950s parts of the tidal river in London were declared ‘biologically dead’ but now EA surveys have revealed that a staggering 127 different species of fish are living in the heart of our capital city. For the fourth year running I organised the Tidefest Angling Championship on the Thames at Kew, Chiswick and Barnes and once again big weights of bream were caught along with small barbel, carp, roach and dace. As part of Tidefest, which is sponsored by Thames Water with the aim of ‘reconnecting Londoners with their river’ we organise river dipping for local kids on the foreshore by Kew Bridge. And for a second year baby bass featured in the catches showing what an important nursery area this has become.

Thanks to the EU Waste Water Treatment Directive we have seen a progressive improvement in the quality of sewage effluent which has made a huge difference to this, the most heavily abstracted and modified watercourse in the UK. And there’s more good news. Within the next next six years construction will be completed on the massive £4bn Thames Tideway Tunnel which will intercept the storm overflows from the combined sewerage and rainwater systems, keeping 36 million tonnes polluted water out of the river by sending it straight to the treatment works at Beckton. I am, of course, proud of the role that the Angling Trust played in lobbying for the Tunnel in the face of some short sighted but potentially influential opposition. Even now the tidal Thames never fails to impress me with the range and quality of fish that it throws up. Last year I had that well publicised two pound roach from Chiswick and just a couple of weeks ago my old mate and fellow Thames advocate, Keith Arthur, had one just a few ounces lighter a little way upstream. I’ve also heard of some cracking roach, big enough to make grown men slather, coming out at the top end of the Tideway. If sport like this is happening now just how good is the river going to be once that inceptor tunnel is up and running?

Moving up river to the middle reaches and this season has seen some very happy match and pleasure anglers enjoying some of the best roach fishing that any of us can remember for a long time. One of the top matchmen in the Reading area is Simon Couling who recorded 105lbs of roach in five consecutive club matches on our local stretch at Pangbourne. The same fishery saw a winter league match won with 47lbs of roach and skimmers on the float beating a 30lbs bag of feeder caught bream. How often does that happen! 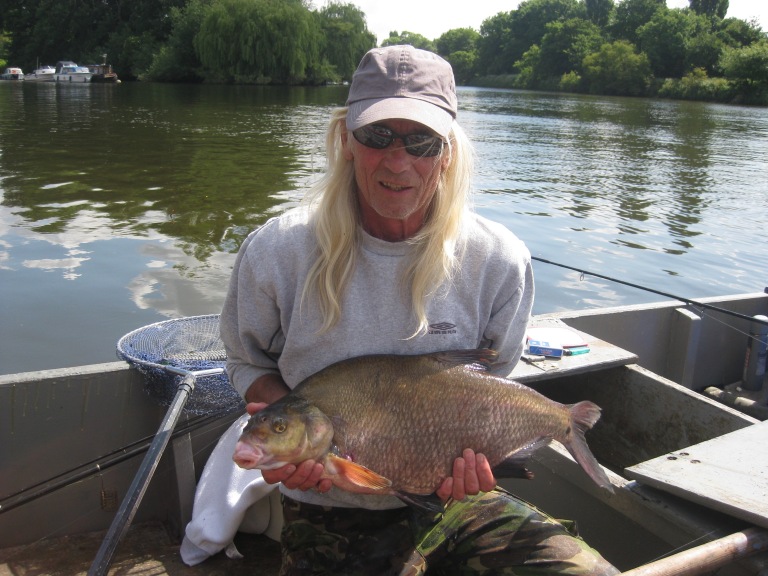 Similar catches have been recorded from Wallingford to Oxford and above. For my own fishing I now have no need to travel far from my home in Reading to enjoy some cracking sport. Although my mates in the local EA fisheries team told me about some pretty impressive evidence of recent successful spawning years on the Thames it wasn’t really until last season that the penny dropped for me and I realised that something special was happening. I had a few hours to kill and a bit of bait left in the fridge so I popped down to river and slung out a groundbait feeder with a couple of red maggots on the hook. In three hours I never had a chance to put the rod in the rest as the bait was intercepted by a hand sized skimmer bream or small roach within seconds of the feeder hitting the deck. I even switched to the old ‘dink dink’ set up with a short hooklink on an up line paternoster to improve the hook up ratio and it soon became one a bung. The river was simply alive with three and four year old fish that must have successfully spawned and survived thanks to the dry winters of 2011/12 which saw very little in the way of fry wash out.

These fish have continued to prosper in the river and sport looks set to become even better in the coming years. I know these things are cyclical and that floods and predation can have an impact, as they did with the summer floods of 2007 which caused all sorts of chaos and displacement, but I really do believe that we are at the start of something special on the Thames and I’m bloody loving it!

Part of me still has that anglers tendency to want to keep secret a new bait or technique but I can hardly do this in the case of the ‘magic bean’. Not least because all credit for these great replacements for those ‘awkward to cook perfectly tares’ has to go the highly successful London angler Brigepal Singh and to Keith Arthur who let the cat out of the bag in his Angling Times column. Brijpal’s wife uses the Urid Bean in stews and curries and it didn’t take long for them to find their way into his bait box.

Preparing them is simplicity itself and unlike tares there’s no need to soak them for 24 hours in advance or to keep checking for the exact moment to take them off the boil for fear of ending up with a bait that is too hard or too soft. They are of uniform size, fractionally bigger than a grain of ‘huge hemp’ and catapult out in a nice tight pattern. Their texture is rubbery and unlike tares they often remain on the hook after a missed bite giving the angler the option of continuing to run down the swim without constant rebaiting. Minnows and bleak hate them, roach, chub and dace love them and they cost next to nothing from Tesco’s or your local Asian supermarket – so what’s not to like!

To cut down on the number of Facebook enquiries I’ve been having about them, since I foolishly posted a rather nice bag of bean caught Thames roach, here’s the recipe.

Take a pan of water, if you’ve got some old hemp water so much the better but it’s not vital, and soak half a pint of beans for an hour or so. Add some sugar and two ferrous sulfate tabs or some bicarbonate of soda to darken, then bring slowly to the boil and simmer for fifteen minutes. Take off the heat and pour with the liquid into a flask. Leave overnight then strain off and bag and take fishing. Easy as that.

So my advice is to ignore the false prophets of doom, get down to your local river and enjoy some great fishing. And if they’re having the hemp and you like a bag of roach – get on the bean!

Martin will be joining Keith Arthur at the Angling Trust AGM, on Saturday, 18th November at West Midlands Golf Club & The Lake at Barston starting at 10am, for Question Time-style debate about the future for fish and fishing. More details here: